Parents Make Sure Your Boys 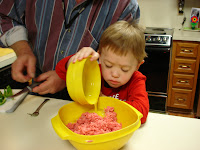 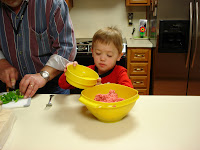 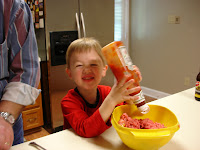 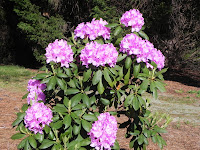 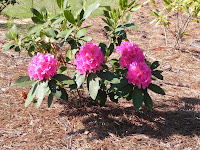 Even though our front yard was destroyed by the state ..........Beauty has still managed to come through!
Love, gayle at 6:06 PM 30 comments: 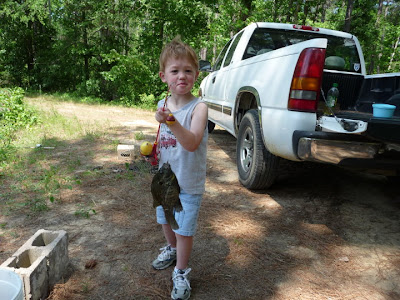 Memories About My Parents

I received this letter several months ago from my Aunt. It means the world to me.

I was thinking about life before you and LynDel were born a few days ago and I’m not sure I’ve ever told you about times I spent with your Dad & Mom before and after I married Uncle Del. If I have, I apologize for the repeat.

When I met everyone years ago at a family picnic in Griffith’s Park, I was immediately accepted and I liked them all very much. Your Dad & Mom were very nice to me (a17 yr old who was enamored with Uncle Del) and Uncle Charles was especially fun. He was like the brother I never had. That was, what was to be, the beginning of a lasting love for the Clawson’s I met that day. Aunt Alta and Uncle Joe were there too. I remember spending Thanksgiving with Dad & Mom and then at Christmas there was a time of sharing as well.

The following year your Dad joined the Marines and Uncle Del went into the Naval Reserve. This would have been 1952 I believe. When your Dad was in Boot Camp at Camp Pendleton Uncle Del, Dad & Mom Clawson, your Mom and I drove down to see him. Unfortunately it was raining that day and how it did pour. We had to sit in the car and eat the nice lunch that we had brought. But that was O.K. we were glad to be together. From our vantage point we could see the tents that these Recruits lived in and was I shocked to see a 10” high space, from the ground up, all around each tent. Talk about automatic A/C that was ridiculous. Your Mom wasn’t thrilled with it at all. Your Dad had a bad cold that day and I’m sure that was the reason. Probably a lot of the other Men had them as well. What the purpose of it was I’m not sure but I suspect it had something to do with their strict standards and wanting “tough” men in their outfits. Your Dad survived it but to my way of thinking it wasn’t necessary. (but what do I know ) Uncle Del didn’t have that kind of conditions to live with. He had lots of strange things to do but that one still stands out in my mind after all these years. We had a great day in spite of the weather and I know your Dad was glad to have us there. We must have been a sight, all of us squeezed into that car but we did fine. Uncle Del just reminded me that a man from the base was also with us in the car. (we had fried chicken, potato salad & beans among other things) We steamed up the windows too .

Another memory is of meeting your Mom for lunch downtown. We both worked down in the same area but at different places. (Aunt Alta & I worked in the same building at one time) At times I would go home with your Mom on a Friday Night and spend the night. (after Uncle Del had been called up from the Reserves to active duty)We’d have such a good time. They had this cute little house that was behind another big home in LA. Your Mom & Dad were married before us of course and when Uncle Del was called up, your Dad returned the favor of taking me to see him when he was in Boot Camp in SanDiego. Now picture this, he only had a weekend pass and he’d come up on Friday Night, drive me, plus you Mom, to San Diego on Saturday, then have to return to base on Sunday. He was stationed in Barstow at that time. Talk about a lot of driving!!! I’ve often wondered how that set with your Mom. I’m sure she wasn’t always thrilled but I don’t remember her making any remarks.

Remembering the Wedding: when we were married, your Dad & Mom stood up with us as you know and the only regret I have is that we didn’t have the guys wear their uniforms. That would have been special. But we were young and dumb. Before the wedding, your Mom was a help to me. We talked of many things on the nights I spent with her and she helped me find someone who could lend me my Veil, as her dress didn’t have one. She was already pregnant with you by this time and we weren’t sure she could get the dress on she was to wear as the Matron of Honor, but she squeezed into it. It was an interesting afternoon and evening. The night before, Uncle Del and I had gone out for a Milk Shake and I spilled some of mine on my Coat. I had to take it to the cleaners (as it was the only one I had) and put in on a rush to get it clean before the Wedding. We made it but I wasn’t sure at the time of course. Another detail was the hall we were to have the reception in wasn’t cleaned when we got there so who do you suppose did it, the 4 of us. And, it that isn’t enough, there was no ice for the punch when all got set up sooo your Uncle went after it (before the wedding and held it up a half an hour) But all went well after that and we got “hitched”.

Another thing your Mom and I did together was our pregnancies. I proceeded to get P.G. right away (although we weren’t planning on that) so your Mom & I went to the Naval Hospital together. I can’t seem to remember where it was but we thought it was FAR away. It makes me laugh now as we are so spread out all over this area as a family, an hour drive is nothing any-more. Your Dad had gone to Japan by this time and I was living in an apartment by myself in LA. When Uncle Del couldn’t come home I’d go visit your Mom. I worked till the time we could get a place together in SanDiego which was August. (You came along the month before and your Mom was busy with her new “Baby Girl”)


I really treasure the time your Mom and I had together. She informed and guided me thru things I wasn’t too sure about. Our lives changed after I moved. I had a new way of life to get used to living in Naval Housing and your Mom had to be a Mom without your Dad for a while. But we both got thru it O.K. What an experience that was. But that is another story.

When we both were no longer Service Men’s Wives, and got back into close proximity again, we became close as couples and as you girls grew up you spent time in our home and we played lots of cards in your parent’s home. The only way I can remember any of these things now is when God prompts me. I look at old pictures but can’t conjure up the day they were taken. But life goes on and new people come into it but the one constant that I know of is God. He Never Changes. I’m so glad He brought your Parents into my life. They were neat people. Parents are a treasure among treasures. Yours and my Parents are gone but the memories linger on. We both have our own families now and memories to build with them. We have friends who come into our lives and they deposit memories as well. 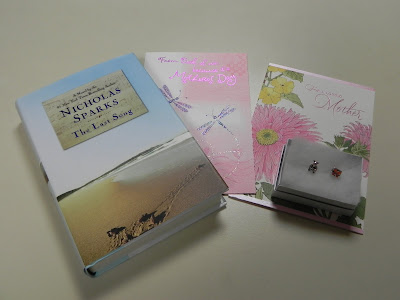 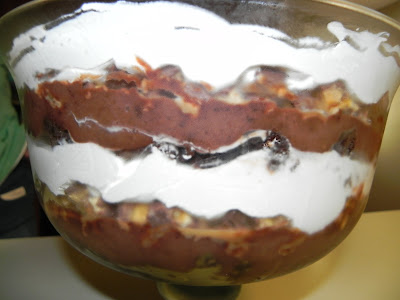 Oh what a beautiful Spring day here in NC! I had a wonderful Mother's Day with Angela, Emily, Bryson and Gerald. We had a delicious steak lunch at Lonestar Steak House. Then back to my house for dessert. Emily made some type of chocolate truffle dessert. It had chocolate brownies, pudding and Snickers bars with whip cream between layers and on top. Heavenly!!! Then I opened my gifts. Two new Pandora charms from Emily....a kangaroo with baby and a orange (Bryson's favorite color) flower. From Angela I received the latest Nicholas Sparks novel The Last Song. Perfect gifts for me!!! I couldn't have asked for a nicer day! I felt truly loved!!
Love, gayle at 7:58 PM 52 comments:

The memories today are so hard
to bear,
As sharp as if it was today
not years and years ago.

The pain today is so hurtful,
As if it was today
not years and years ago.

I cry out in rage for what
could have been, but
never will be.

I wish I could go back in time,
Feel the love, touch, caring,
smell, the Everything
That once was,
That never will be.

Life has played a dirty trick
on me.
Will I ever be able to forget?
No not forget.

Will the pain ever be
not as great
as if it was today
But years and years ago,

That I lost my mother!