A Day in the Snow 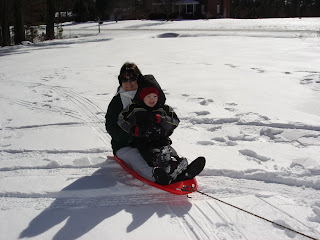 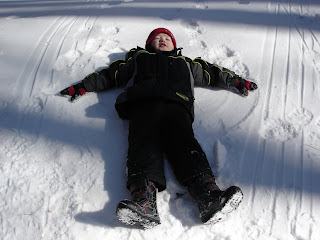 Bryson making a Snow Angel. No one knows where he learned that. 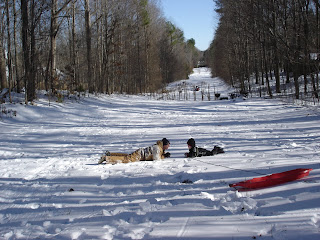 Sean and Bryson fell off the sled! 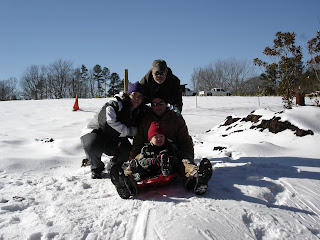 
We had a wonderful day in the snow with Sean, Emily and Bryson.
Love, gayle at 9:04 PM 23 comments: 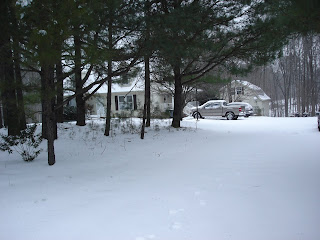 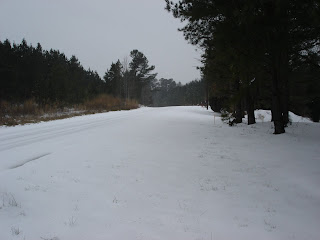 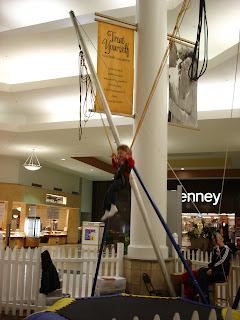 Bryson ~ 3 years old ~ had a fun time Bungee jumping at our local mall!

My husband took this picture through our trees last night. I just love pictures of the moon! 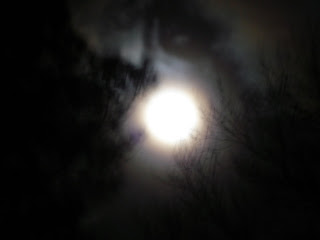 My daughter sent this to me today!

A man was sitting on the edge of the bed, watching his wife, who was
looking at herself in the mirror. Since her birthday was not far off he
asked what she'd like to have for her birthday.
I'd like to be six again', she replied, still looking in the mirror
On the morning of her Birthday, he arose early, made
her a nice big bowl of
Lucky Charms, and then took her to Six Flags theme park.. What a
day! He put her on every ride in the park; the Death Slide, the Wall
of Fear, the Screaming Roller Coaster, everything there was.
Five hours later they staggered out of the theme park.
Her head was reeling and her stomach felt upside down. He then took her to a McDonald's where he ordered her a Happy Meal
with extra fries and a chocolate shake.
Then it was off to a movie, popcorn, a soda pop, and her favorite
candy, M&M's.
What a fabulous adventure!
Finally she wobbled home with her husband and collapsed into bed exhausted.
He leaned over his wife with a big smile and lovingly asked, 'Well Dear, what was it like being six again?'

Her eyes slowly opened and her expression suddenly changed.
'I meant my dress size.

The moral of the story: Even when a man is listening, he is gonna get it wrong.

Week #3 Eating Healthy and Working Out 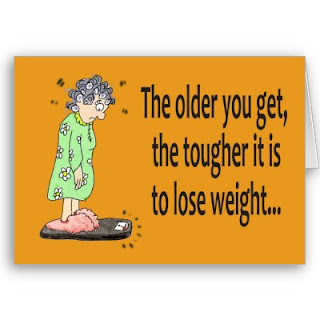 This past week I did pretty good eating healthy. I didn't pig out on chocolate on Wednesday...just walked right by....It called my name but I didn't answer!!! It felt so good!! My favorite time to eat is at night watching TV with Gerald. This has been going on for years. It all started when the girls were little, after putting them to bed, I would sit down and relax, turn on the TV, get a book ( use to read during the commercials) and EAT. So it's hard to break a 30+ year habit. Shoot I never even smoked that long! I did great this week with the night eating too. On the negative side....I had a milk shake (Gerald's fault, he wanted one) and two Italian dinners.

My working out went for 2 times last week to 1 time this week. This has to improve.

My scale problem has been solved!! I know lots of people don't use them but I have to. My daughter Angela email me a consumer report on scales so I went out to Target and bought the top rated one with my Christmas money and it wasn't even that expensive. Under $30. It is digital which I use to not like but now I do. So I will only get on it once a week and only one time.

Since I got the new scale........I am really not sure about weight loss this week. It's like starting over. According to the New scale I have gained 1 pound from last week but have lost 3 all together. It's hard to say......don't think I gained but I am sure I didn't lose anything either.

This is a new day and new week and all I can do is move forward and do the best that I can!!!!

Week #2 Eating Healthy and Working Out 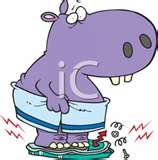 How to start??!!! This week I didn't do as well as I did last week with eating healthy or working out. I only worked out with the Wii 2 times. I have no excuse .........just didn't! Eating I did OK. I had a few slip ups here and there. Well I did have a major major chocolate slip up big time on Wednesday. This week I have got to get serious and do what I know I am suppose to do. I can do it, I've done this before!! I don't know what to do first... it's never been this hard before. Should I just do one thing next week....like increase my workout, my water, or really watch my eating ( maybe do weight watchers points ) or should I try to do all 3. Yes!! that's what I will do...I will do all 3!!! According to my scale (who is trying to drive me crazy, I think) I lost 1 pound but if I get on it again then I lost 0 pounds and then when I get on it again I have gained. Maybe it's just time to get a new scale!!
I will do better next week!!!
Love, gayle at 10:42 AM 38 comments:

Week #1 Eating Healthy and Working Out

This week was just OK. According to the Wii Fit ( this afternoon), I have lost 2.5 pounds and according to my scale, I have lost 3 pounds. I bet I got on and off the scale 10 times this morning. I finally had to give up or I was going to be late for work. Every time I got on it, it weighed me something different. Even after I hit it several times, it still didn't cooperate!! I think I am going to buy a new one.
This week I ate pretty good and exercised 3 days.

I hate to exercise...It doesn't matter how much I tell myself I love the Wii Fit and I do, I still don't like to exercise.

My weight lose is not what I expected for my first week. Usually I lose more. I am getting older, I tell myself, so I just should be thankful that I lost what I did.

I am sick of this already.

Really I am trying to have a positive attitude. 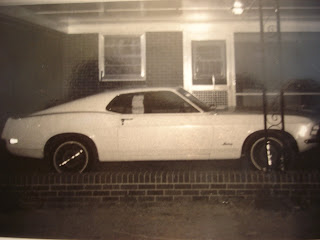 The very first car I owned was a White 1970 Ford Mustang Fastback, bought and paid for with my own money. I was 17 years old and was working at the Telephone Company. After buying shoes, purses and clothes, I saved almost every cent I made. That was many many years ago and I have a terrible memory so bare with me. But the way I remember it: my dad and Maxine went to the Ford Dealership and looked at cars and then came back and said they found two...can't remember what the other one was but anyway I picked the Mustang. I don't have a scanner but I am going to try to take a picture of a picture and post it. Oh did I mention that I didn't have my drivers license when I bought it and didn't get my license until about 3 months later. My car payments were $88. a month for 3 years, I think.

We traded that Mustang in for a Chev Station Wagon in 1973.

Then we bought a Honda Civic, Ford Tempo, a Mazda, a Saturn, another Saturn in Baltimore, Md because we wrecked the first one running over a medium trying to get gas on the way to my 2nd cousins wedding. Because we needed a big trunk for the many trips we planned on taking over the next several years we bought a Dodge Intrepid which I still have just sitting in the yard.
My current car is a Honda CRV. I couldn't decide between the Honda Accord or the CRV, and after driving both, I just liked the way the CRV felt and drove. I also rode in the back seat of both and the CRV was the winner hands down. It doesn't have the power of the Intrepid but I sure like the feel of being up higher. I can slide out of the seats rather than pulling and sometimes crawling out of the lower Intrepid.

Because of the many trips we made touring the US and with no car problems I think, I would have to say the Intrepid is my fovorite. I have many wonderful memories of places and people I met while driving this car.

Can't judge the CRV yet as I haven't had it long enough to fairly judge it.
Love, gayle at 5:00 AM 19 comments:

I have been thinking some about resolutions but not extensively. Time ....that's my problem ...I don't have the time...to do anything let alone think of resolutions. So I thought I better record the two I did come up with before the years over. Which by the way will happen in a blink of an eye. My Motto is going to be Do It Again in 2010. I resolve to diet every year...eat healthy! So this year is not going to be any different. Again my next resolution is to exercise more. I make this one every year too. They say if first you don't succeed try try again. So I am going to eat healthy and work out more for 2010. I could go on and on about other things I need to work on or change but I'm not. I am hoping that with only 2 I can be successful!! If successful, I know from past experience ....I will feel better physically and mentally!!! Plus I have some pretty cute clothes in my closet just waiting to be worn!!
Love, gayle at 4:40 PM 40 comments: 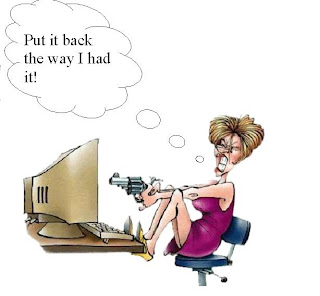 We just installed Windows 7 and I have had nothing but one problem after another.
Problems: My icons changed ...we had them the way we wanted them and they just changed by themselves, my print size is to small so I increased it and now it's too big, when I open up a new window..like blog or face book or email...it doesn't open up full like it use to...I want it the way it use to be, we made a back up DVD of our pictures and now we can't get it to show since we changed to Windows 7. We thought all our problems were going to be solved by changing from Vista to Windows 7 but that has not happened.. I am about to pull my hair out and my husband is being driven NUTS by ME!!!!!I can not ask him any more questions today. Help!!! All I have done today is search for answers and haven't gotten any. Oh and I changed my blog and then couldn't even read anything and had to go back and fix that and I am not even sure I like that.
And....none of this probably doesn't even make any sense to anyone...
Happy New Year to Me!!

I do really hope your first day of the New Year has gone better than mine!!
Oh and I am very thankful for my many blessings!! I really am ...It's just been a bad computer day.
Love, gayle at 10:24 PM 32 comments: