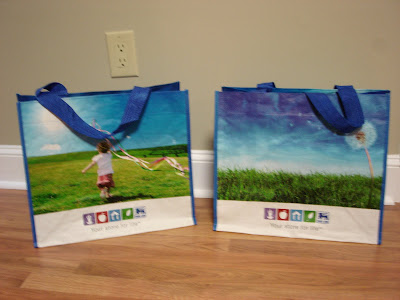 I must admit ~ please don't hate me ~ I have not been into recycling. So I am very proud of myself today because I bought my very first reuseable bags. I only got 2 because I didn't really know if I would like these or not. I had seen some different ones on the Internet and my daughter has another kind. Plus, I just really wasn't sure how many to get and I think I might want a variety. My daughter has one that her mother in law got at Trader Joe's that is so cute, so I think I will go try to find one like it. My bags are not that large but hold tons of groceries.
Everyone has to start somewhere ~ I am starting with pretty reuseable bags!!

When Will They Stop 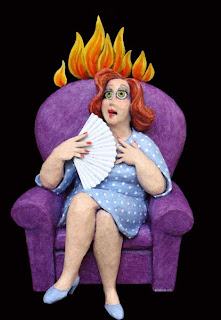 Does anyone know when these HOT FLASHES will END? I am so tired of them!! One minute I am freezing.......my husband likes it cool/cold in the house and then next I am burning up HOT!!
Love, gayle at 11:28 PM 48 comments:

Sand Beach ~ partially formed of shell fragments. It's the only sand beach in Acadia National Park ~ all the others are pebbles and rock. On the right were large cliffs and boulders with seaweed and barnacles.

Thunder Hole ~ waves crashed into a narrow chasm and exploded in sound and spray.

Our next stop was to look at a bridge made out of stone. All around it were millions of mussels and snails. It is chilly out.

Jordan Pond, Cadillac Mountain ~ at 1,530, it's the highest point on the US Atlantic seaboard. We drove to the top and then walked around the summit. The wind was blowing about 40mph. It was a dense fog with occasional clear spots. We could see Bar Harbor. Within 2 to 3 minutes conditions could be extremely foggy or clear.

Stopped back at Thunder Hole

Cameden ~ a seaside town nestled beneath the Camden Hills. We walked a little and went in a wood shop called Once a Tree. Then we walked out to a harbor in Camden Bay and saw a fleet of schooners.

Freeport ~ home of LL Bean ~ both sides of the streets were lined with stores. First we went to LL Bean which is open 24 hours 365 days a year. It had 4 levels and we spent a long time looking around. Then we went to the Levis store and looked around there. In the area there were more than 100 retail shops and name brand outlets. Stopped at a stand and got a hot dog. My hot dog was long and skinny and the buns were strange looking. The top and sides looked like regular bread folded in half and the bottom was like and end piece of bread.

Portland ~ We drove around the Back Cove on #1S. Portland is the largest city in Maine. We drove though part of the downtown area.

Cascade Restaurant ~ I had a whole lobster, salad, roll and baked potato $9.95 Gerald had sirloin tips, salad, rice and a roll $9.95

Anthony, our waiter had to show me how to crack and get the meat out of the lobster. Messy! Had to were a bib!!

Kennebunkport ~ We saw former President Bush's vacation retreat. It overlooked a rocky inlet. There were 3 different houses on the property and 1 was larger than the others. Two limos were in the driveway and about 3 other cars and also 2 bikes. While we were there we saw Barbara Bush and her dog walking. Gerald reminded me that Mrs. Bush waved to us!!

York ~ beach ~ miles upon miles of cars parked at meters

Maine was absolutely breathtaking!!! I wish that I had been more descriptive in my journal. Look at the gas, food and hotel/motel prices. They sure have changed.
Love, gayle at 4:58 PM 35 comments: 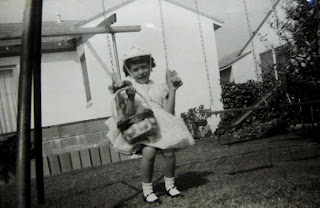 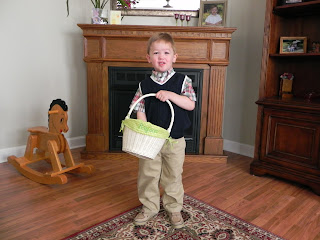